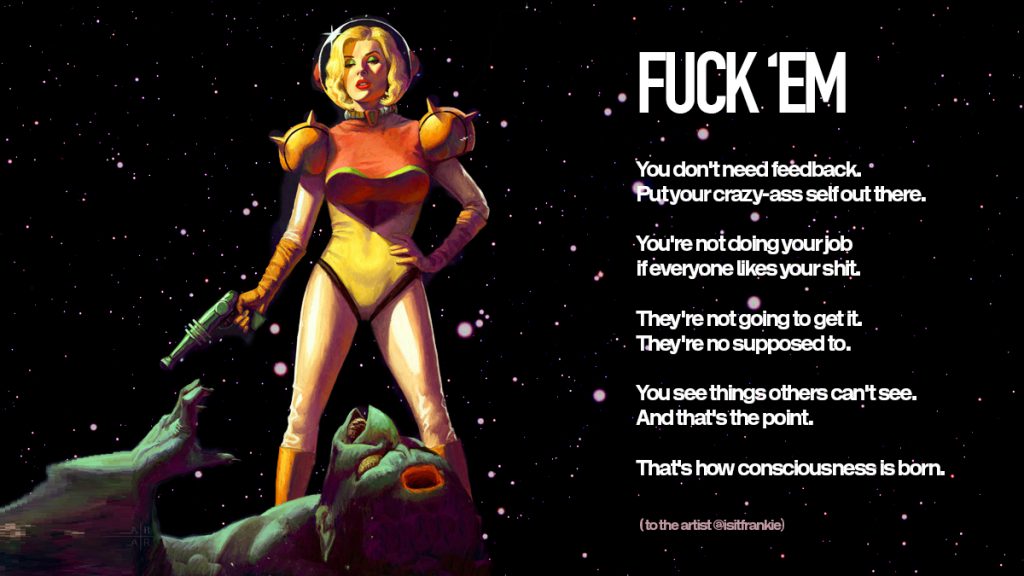 Do you know about the seductive feedback loop? I introduce the idea that feedback can be dangerous for the artist.

So if you haven’t read the part the sets up the loop idea, you can read that here.

Or if you already know feedback sucks and want a roadmap of how to escape the loop, dive straight in.

First I’d like to describe the seductive feedback loop. What is it? Well, based on what I’ve observed, as the habit of needing feedback gets stronger we develop a belief around needing it and then a feedback loop ensues. It looks something like this;

As I took a closer look at the loop above I realized something deeper was going on. Something insidious.

Sure there are the thoughts that lead to habits that lead to beliefs. But this almost auto-pilot assumption and urge to know what others thought so I could make things “better” ran deep.

As I unravel this ‘feedback’ loop today, I have realized that it has it’s roots in a much more primal and fundamental program. The program of needing to be liked.

Because guess what? Feedback never made me or my creations any better. Ever. Nothing is ever better. Just different. And that is a very important realization. Things change, evolve maybe, but rarely are they better or worse, just different. Just like people.

I labored and toiled for years to please everyone. And I tied myself in knots doing it. My unique creations often died an early death or death by ‘complications’. And I was getting more and more stressed as nothing ever came to completion. Nothing was ever ‘birthed’.

I also want to make it perfectly clear that this was my experience. Other people aren’t as desperate for validation as I once was. Other artists are tougher and stronger and have different programming to mine. They can dance, twirl and laughter in a room full of criticism and not care one bit.

But here’s what I’ve found. An incredible amount of artists I know are just like me. Sensitive, healers, seekers with a vision and eternal lovers of the mystery. We see things other folks don’t see. And that’s the point.

Artists bring to light ‘things’ that have never before been thought of, conceived, mixed, made, filmed, sought, collaged or played together. Of course there are always going to be those who don’t get it, like it, or understand it. They’re not supposed to. Or if they do, they’ll ‘get it’ in an unexpected way and in their own time. Just like an artist makes her art in a way no-one else can.

Sometimes it happens that you really don’t like a piece of art someone has put out into the world. But then days later, sometimes years later, you see that same work of art again. And for some reason, this time, a chord is struck inside you, possibly one you didn’t even know existed before. New meaning is made. Consciousness is born. All because some ‘crazy’ artist wasn’t afraid to put their work out there even when some people judged it.

If you really need feedback I suggest two things.

And if you want to be really advanced about it, do what my courageous storytelling mentor Terrie Silverman advises. Ask them, ‘What drew you in? What captured you? What would you like to see or hear more of?’.

Always ask them to focus on what’s working, because we get more of what we focus on.

You might not relate to any of this. You may have a resiliency to the thoughts and feelings of others that I just wasn’t endowed with.

But I am a complete and hopeless empath and I’ve had to teach myself what healthy boundaries look and feel like. I have had to learn to protect my art from feedback of all kinds, the unwanted, unconsidered, sloppy, negative, uncaring feedback and even the inflated, superficial, positive feedback.

The biggest challenge of all has been to come to terms with the debilitating impact I’ve allowed all kinds of feedback to have on my creative process.

So as you let these ideas digest don’t forget the most important thing you can do is go out and create with wild abandon and don’t ask permission and don’t listen to naysayers.

[To read Part 1 of this blog article, click HERE]